That was the reaction from a few of the other dealers at the shop. … when I told them that I had painted a table….green!  I paint 99% of my furniture a shade of white or cream.  (Who knew there were so many shades!)

I was at Lowe’s and there was a gallon of  green “oops” paint for $5.  Significantly cheaper than most paints so I bought it. 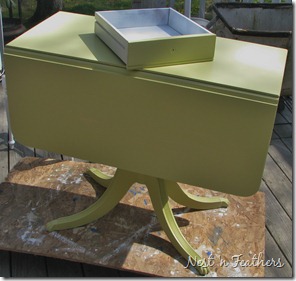 It’s a kind of…..mmm…..Spring green’ish?  When I took it outside in the sunlight the color was kind of shocking for my eyes since they are so accustomed to white.  I let it sit for a couple of hours to see how I felt. 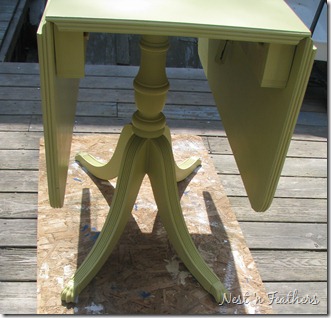 It’s a pretty color but I just thought the all over green was a little too intense. 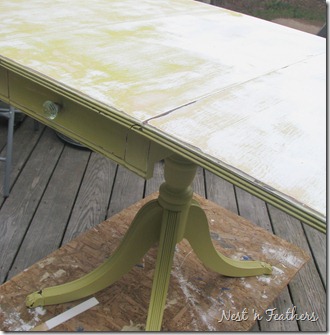 So I distressed the top.  Couldn’t help myself. 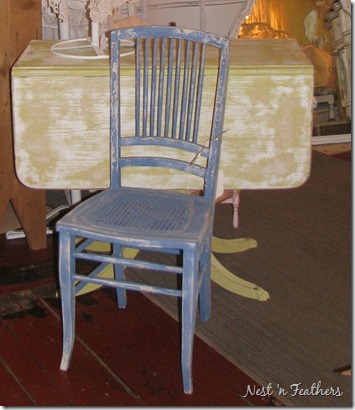 After 4 hours of redoing my booth for a weekend sale I was pooped and this is the only picture that I managed to take.  But look!  A blue chair too!  I’m working on it…..
Posted by Maureen at 11:07 AM 5 comments

I painted this huge chalkboard over a month ago and it has been sitting in my garage ever since. 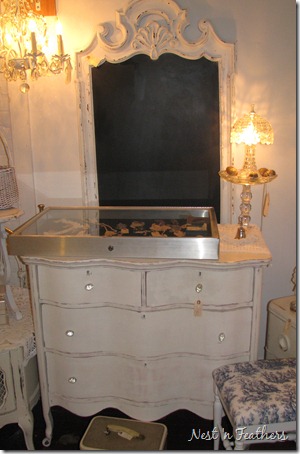 It’s big and heavy and I was worried about hanging it on the drywall in the shop for fear that it would come crashing down.   I finally decided that I was being silly.  First of all, it wasn’t going to sell sitting in the garage and, secondly, I was getting tired of moving it around when I worked on other projects!

So off to the hardware store I went.    Looking for industrial sized picture hanging ‘equipment’.  Bigger is better, right?

Since I prefer the local mom & pop stores that's where I headed.  I was greeted by a very helpful guy when I arrived.  I told him what I was looking for.   Already knowing in my head that what I needed were some big honkin’ wall plugs,  screws, etc…..a drill, hammer….    He suggested that I try these. 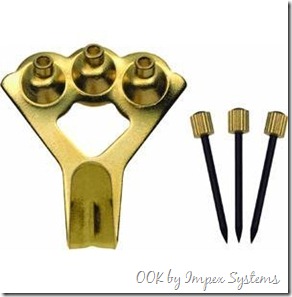 He told me that they are much easier to use and only require a hammer to install.  They hold up to 100 lbs.  No drilling for wall plugs, etc.  I was hesitant but he seemed to know what he was talking about.   Well let’s just say that it pays to ask questions.    I had the chalkboard hanging on the wall in less than a minute.

Lessons learned?   Use the local stores whenever possible.   Ask questions.  (That’s what they’re there for.)  I might still be standing in the aisle of the big box store with a blank look on my face.
Posted by Maureen at 1:50 PM 4 comments

Email ThisBlogThis!Share to TwitterShare to FacebookShare to Pinterest
Labels: booth space, for sale, good things, how to, shop, tricks of the trade


A few months ago while scouting a local salvage yard (a la Sanford & Sons kind of salvage yard) I came across a trio of old, crackled cabinet doors.  Crackled to perfection. 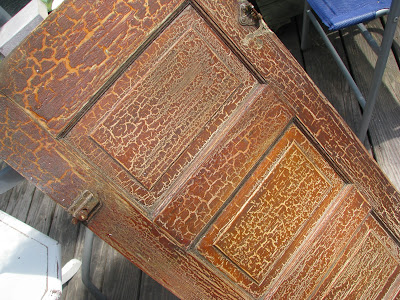 So, up first.   The first door was upcycled to a frenchy sign.  No sanding and I left the old hardware intact. 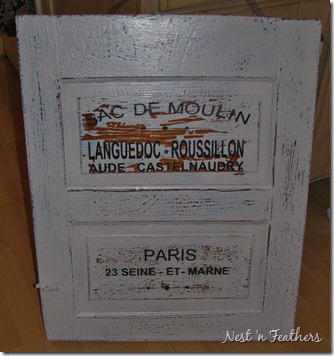 Painted, stenciled, distressed and sprayed with a clear spray.  I bought the stencil from http://junkinjunky.blogspot.com/.   (SOLD!)

Door No. 2.  (I feel like I’m channeling “Let’s Make a Deal”)  took a different route.    I painted them both at the same time but I couldn’t decide what I wanted to do.  A few days ago it struck me so I gathered some supplies. 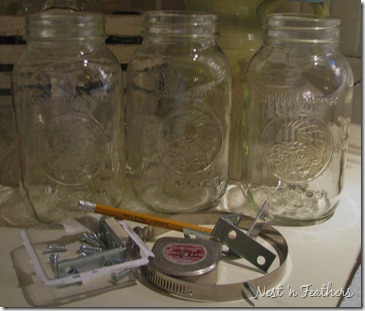 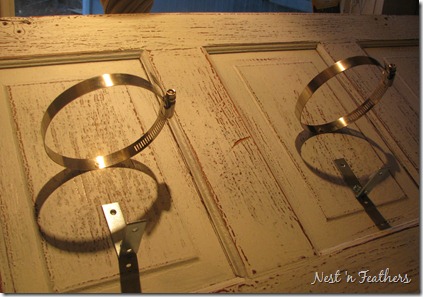 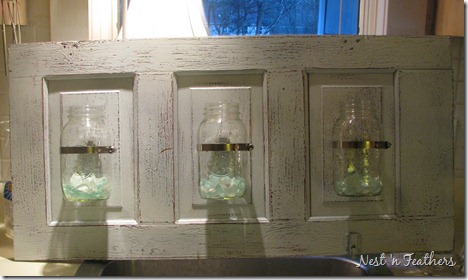 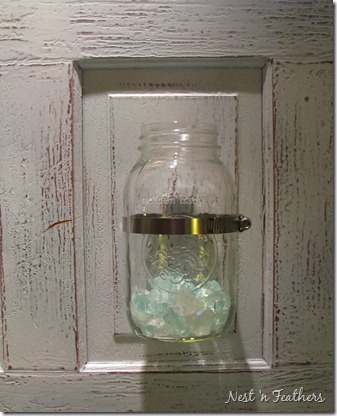 I love the crackled patina on these doors. Tomorrow I’ll pick up a few flower stems and off to the shop it goes.
Posted by Maureen at 11:00 AM 9 comments

It should have been easy…..Blue Toile Bench


Our shop is having a Spring sale this weekend so I’ve been going full tilt getting things ready.  I’ve been sanding, painting, cleaning, ironing and running around like a crazy person.

Today was stocking day and I wanted to squeeze in one more piece.  I chose a vanity bench.  Quick & easy project.    Apparently there is no such thing.

Removing old fabric can be much more time consuming than putting it back on.    Why does anyone put new fabric over old fabric?   It’s gross! 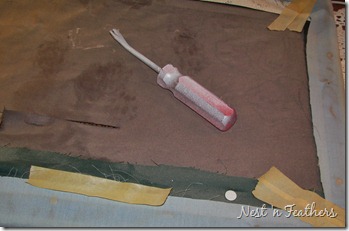 The first layer was put in place with masking tape!  That’s a new one on me. 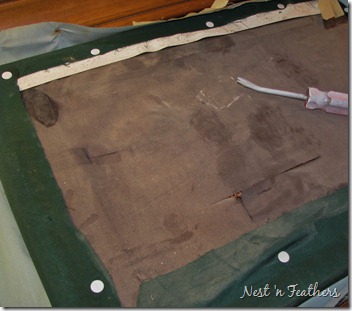 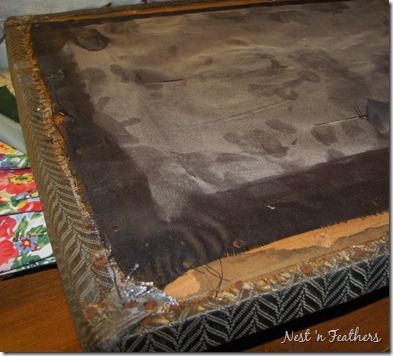 Layer 4:     A disgusting-ly dirty fabric held in place by a ton of rusty old hand forged nails.  Why would anyone cover over something so gross?

So after removing the layers I was able to use only the frame and I cut new foam and fabric. 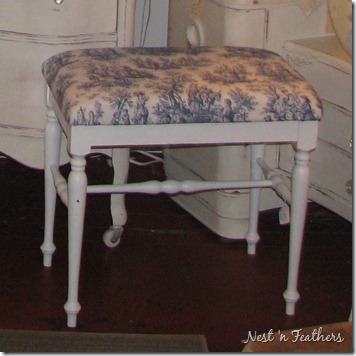 And….voila!  Installed in the shop and ready to go home with someone.
Posted by Maureen at 11:30 AM 1 comments


Tomorrow is the 1 year anniversary of our relocated shop.  It’s been a crazy year in this crazy business.

What I sell varies from month to month.  Either I can’t keep up with furniture or I don’t sell any.  There is absolutely no rhyme or reason.  March was all about smalls.   Ransacked.

I had this lighted curio waiting in the wings for 3 or 4 weeks. 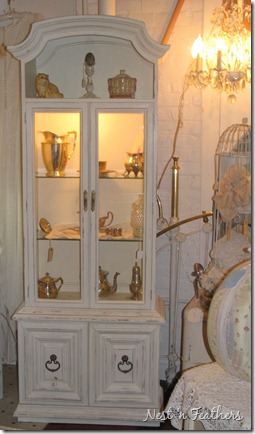 I needed to reclaim some space in my garage to work on projects so into the shop it went. 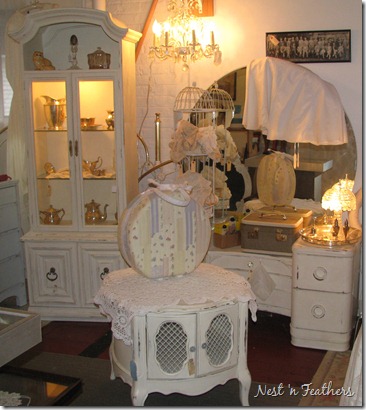 See that chandelier?  It’s a true antique and had cloth wiring and…. I rewired it myself! 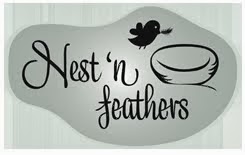 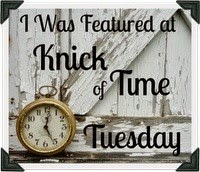 Knick of Time
Upcycled and recycled pieces from the past.

it doesn't hurt a bit